TRAINING WITH A CHAMPION IAN DUCKETT - WITH HONOR


I LOVE TO GO INTO THE GYM WITH THIS ATTITUDE.

THERE IS NOTHING WRONG WITH A LITTLE SWAGGER - EVEN A LITTLE FEAR.

THAT FEAR, GREAT FEAR, TIGHTLY CONTROLLED, IS A GREAT STRENGTH AND WEAPON.

ESPECIALLY WHEN IT COMES TO DUMBBELL PRESSING 90 LB-ERS, FOR 10 PERFECT REPS, WITH RHYTHM. PAUSING AT THE TOP AND KEEPING TENSION ON THE MUSCLE AT THE TOP AND BOTTOM PART OF THE MOVEMENT.

THAT'S WHEN YOU SERIOUSLY START BUILDING A HUGE CHEST, A GREAT SET OF ARMS OR LEGS LIKE TOM PLATZ.


THROWING THE WEIGHTS AROUND FOR EGO AND SHOW WON'T GIVE YOU MUSCLE DEVELOPMENT WITH CLASS TO LAST. THIS IS WHERE YOU FIND THE TRUE WINNERS. NOT STAGED EVENT WINNERS.

VERY FEW REACH THE LEVEL WHERE THEY CAN PUT THEIR WHOLE SELVES INTO EVERY MOMENT IN THE GYM.

THERE ARE PEOPLE TALENTED ENOUGH, IT JUST HASN’T BEEN URGENT ENOUGH FOR THEM TO DO WHAT IT TAKES TO REACH THE CHAMPIONSHIP LEVEL.

MY MINDSET IN THE GYM IS -
I’M A WARRIOR, MISSIONARY!

I’M OBSESSIVE IN THE GYM, WHEN IT COMES TO MY TRAINING.

GET OUT OF MY WAY WITHOUT SAYING A WORD!


IT TAKES TIME TO LEARN BOTH TRAINING OBEDIENCE AND LIFE PRACTICE. TRAINING GIVES ME THE CHANCE TO SMELL DANGER, LIVE ON THE EDGE.

THERE IS NOTHING WRONG WITH TAKING CHANCES.

LIFE MUST BE DEVOURED TO PROVE THAT THERE ARE NO LIMITS TO ACHIEVE YOUR GOALS. YOU MUST CONTROL YOUR FEELINGS.

HE WHO HAS THE STRONGEST WILL, WHO BEST CONTROLS HIS FEAR - IS THE FREEST OF ALL 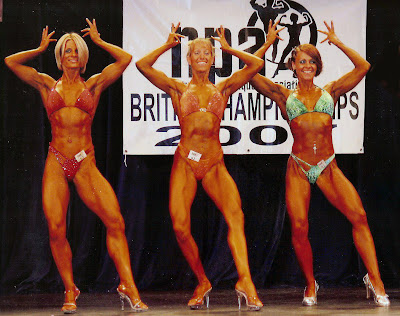 BY IAN DUCKETT AT HIS STUDIO BODY IN DESIGN.

THE USE OF THESE ILLEGAL SUBSTANCES IS A
HEALTH RISK!

YOUNG ATHLETES AND PROS OF ALL SPORTS ESPECIALLY BODYBUILDERS WHO ARE INTERESTED IN USING STEROIDS TO ENHANCE HIS OR HER PERFORMANCE AREN’T LIKELY TO TALK ABOUT IT WITH THEIR COACH, PARENTS OR FRIENDS. IT’S MUCH EASIER TO GO TO THE INTERNET FOR CONFIDENTIALITY. A SIMPLE GOOGLE SEARCH “WHERE CAN YOU FIND STEROIDS?” GIVES YOU A LIST OF ON-LIINE STORES.

MY TRUTH ABOUT STEROIDS IS - WHAT ENABLES US TO ACHIEVE OUR GREATNESS CONTAINS THE SEEDS OF OUR DESTRUCTION.

THE USE OF THESE ILLEGAL SUBSTANCES
IS A HEALTH RISK

YOU WOULD HAVE TO BE LIVING IN A DREAM WORLD IF YOU THINK YOU ARE GOING TO PUT ON MUSCLE THAT WILL LAST YOU AS LONG AS THE MUSCULAR PHYSIQUE I’VE BEEN ABLE TO BUILD OVER THESE 62 YEARS. I’M PROUD OF WHAT I’VE ACCOMPLISHED AND NO ONE OR NOTHING CAN EVER TAKE IT AWAY - IT IS HARD WORK NOT STEROID USE THAT BUILDS A FOUNDATION.

ONLY OPTIMAL NUTRITION SHOULD BE YOUR GOAL ALONG WITH CONSISTENT HARD WORK IN THE GYM.

STEROIDS INCREASE ONE’S AGGRESSIVENESS, STAMINA AND ENDURANCE, THE BODY'S ABILITY TO HOLD MORE PROTEIN AND WATER INSIDE OF THE MUSCLE CELLS AND BETTER PUMPS. THAT’S IT. ONE’S DOWNFALL IS SURE TO COME WHEN YOU HAVE TO DISCONTINUE THEIR USE.

THERE WILL NEVER BE THE LIKES OF MR REEVES, OLIVA, NUBRET, ZANE, SCHWARZENEGGER, COLUMBO, BIRDSONG, BILL GRANT, PARIS, PLATZ OR MR. ROBINSON - TO NAME A FEW. FORTUNATELY I NEVER SUFFERED INJURIES OR WITHDRAWAL SYMPTOMS FROM MY USE OF ANABOLIC STEROIDS FOR COMPETITIONS, BUT THE HORROR STORIES ARE ENDLESS. EVEN DEATH, MURDER AND PRISON TIME HAVE BEEN THE CASE FOR MANY. SOME ACHIEVE MINOR RANK OF THEIR ASPIRATION TO ACHIEVE THAT CHAMPION STATUS WITH MAKING FLEX, MUSCLE MAG COVERS AND A CONTRACT WITH A SUPPLEMENT COMPANY. IT WAS MY DREAM TO ACHIEVE ALL THOSE THINGS, TOO.

RETIRING FROM THE GAME WITH A HEALTHY MIND AND BODY WAS THE ACADEMY AWARD I WAS SEEKING. ALL THE MONEY, LADIES AND SHORT LIFE OF FAME CAN’T REPLACE THE FEELINGS OF WHAT I FEEL EACH DAY OF MY LIFE: HEALTHY AND HAPPY.

DO IT FOR HEALTH AND HAVE A HEALTHY DAY!

Congratulations on your Olympic sweep. Your athleticism was truly awe-inspiring to watch. I asked my friend Joe Pietaro at New York Sport scene magazine to forward this letter to you. When I learned of your 12,000 empty calorie eating regime, I became concerned not only about your health and longevity as an athlete, but also about the billions of people around the world that you are now in a position to influence. It wasn’t so much the quantity of calories that was a shock, as their quality. One can argue that your diet has worked for you so far, but your short-term choices can lead to serious long-term consequences. Massive quantities of refined carbohydrates at one sitting trigger the pancreas to excrete an over-abundance of insulin, creating the possibility of becoming a diabetic. And while fats in your meals will help slow that reaction a bit, your fats, from what I read, are all saturated. They will deposit in your arteries and give you high cholesterol. Being an athlete does not negate the effect of these foods, but being young allows you to get away with it for now. Look at Mark Spitz, who has attested to having had a spicy, high fat diet, and who now has high cholesterol. What good is $50-million and counting if you are unhealthy?

In all the publicity outlining your program, I have also heard nothing about your water consumption. Water is the vehicle that drives nutrients into your muscles. The performance of muscles and their resistance to injury is absolutely dependent upon the quality and quantity of water consumed. Don’t count the cups of coffee I heard you drink as water. Having been an athlete all my life, and spending twenty-seven as professional bodybuilder, I‘ve seen too many athletes in ALL sports wind up with health problems. Determined not to end up that way myself, I studied everything I could find on nutrition and dietary supplements to ensure my health down the road.

Now at sixty-two and in the best shape of my life, I feel it's my obligation to give you some unsolicited advice. Michael, if you had more complex carbohydrates with fiber, swapped in good fats like nuts, avocado, essential fatty acids like flaxseed oil and fish oil and spread your meals out into smaller ones, you would have just as much energy, but with better recovery and staying power in those last-day-events. A calorie is not just a calorie. Food, along with dietary supplements and hard work, is the fuel that propels your body into a natural anabolic state, in other words, a fat-burning, muscle- building mode. Otherwise, you’re breaking your body down.

Tyson Gay can now testify to breaking down after consuming McDonalds for much of his twenty-nine years. When he pulled up lame in the 200 meters, I knew he was done for. His bad choices have resulted in broken dreams. His coach Jon Drummond should have known better and condemned the bad eating habits. Hopefully, he can learn how to turn his failure into something positive by making changes. I believe I speak for the whole world in saying we would love to see you both in four years at the London Olympic games. Please don’t let your ego lead you into believing you are superhuman, and that being called an American Hero, without being a role model, has meaning. The Boys and Girls Club that you support needs role models that will help them in their programs combating childhood obesity. Their 4.8 million kids need guidance in the sea of misinformation on nutrition. Endorsing McDonald’s and Kellogg’s Frosted Flakes is undoubtedly the wrong message to send kids and athletes who look for leadership by example. Best Regards, Robby Robinson