CHAD WAS WWW.ROBBYROBINSON.NET 's FIRST CLIENT TO MAKE THE JOURNEY TO THE MECCA TO WORK WITH THE BLACK PRINCE ONE -ONE FOR 1 WEEK.

HE CAME TO VENICE FROM RIVERTON, ILL BEFORE HIS COMPETITION LAST YEAR.

HIS HARD WORK AND FOCUS
PRODUCED A WINNER.

HE RECENTLY CHECK IN WITH ME WITH SOME NEW SIZE FROM A YEAR AGO.

GET A LOAD
OF THOSE GUNZ!

IF YOU’RE LOOKING FOR THE KIND OF EXPERT ADVICE THAT WILL GET YOU TO THE NEXT LEVEL, E -MAIL CHAD AT cschaive@bodybuilders.com.

HE IS NOW WORKING WITH ONE OF THE UP-COMING NEW IFBB PROS WITH HIS DIET & CONTEST PREP FOR THE MR.OLYMPIA UNDER 202 DIVISION.

isn’t a matter of forcing yourself to do what you don’t want to do;
rather, it’s about
BUILDING REWARDS
so luscious that you can’t help but follow through with your desired behavior.

My memory of one of Bodybuilding MOST MUSCULAR MEN OF ALL- TIME IS OF BILL GRANT'S PHYSIQUE. MUSCULARITY, DEFINITION AND MUSCLE SEPARATION STILL STANDS OUT IN MY MIND. Hard as stone. A physique you CAN’T HELP BUT remember. A man with a body and soul who loved the game and Art of Bodybuilding. Bill has for sometime turned his attention to promoting, producing, and sponsoring old school bodybuilding competitions.

All of us ROBBY ROBINSON.NET wish THE BILL GRANT CLASSIC much success.
PEACE, ROBBY

The Bill Grant Classic will be staged outdoors to re-create the spirit of "old school" bodybuilding from the great days of Muscle Beach in Venice, California.

Top Five in each class will receive Niels Andersen Sculptures

Tickets & Other Info:
Admission is FREE for all spectators

COMING TO THE MECCA

Ian’s a natural for life athlete who has been at the forefront of natural bodybuilding for 20 years, winning such titles as ‘Mr Natural Britain’ twice and the European title.

He has also placed 4th in the World Championships on two occasions and recently won the World title and the NPA Pro Am.

He is a reputed Powerlifter, winning 6 titles and placing 2nd in the British finals.


Ian is very goal orientated and has achieved each of the goals he set out to do, such as author, illustrator, DVD Producer, owning and running one of the most successful gyms in the UK: Future Bodies Gym.

He is a sort after Guest Poser and seminar speaker, conducting seminars in gyms up and down the country and also in supplement outlets. Producing a subscription only magazine Ian has trained with the best.

‘You should never stop learning’ -- is one of Ian’s motto. 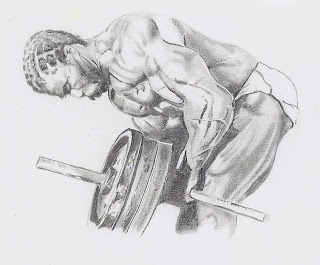 He often travels to the USA to improve and refine his art.

I was contacted by Ian to take on my 4-day Venice Intensive. We are both looking forward to the training sessions.


We’ll film the sessions and show some of the footage on the blog.


Ian’s achievements are what hard work and discipline are all about. At 44 years old, married and father of two, he still feels there is more to learn.

He has a huge desire to master by eliminating limiting beliefs and adopting even more empowering ones.

After a 4-year run hosting the Robby Robinson message board, working to develop a strong connection with the bodybuilding community that has supported me for decades.

Being very self-driven at 62, and having bigger dreams, the internet opened up a whole new world for me.

My vision was to have bodybuilders come train with me, one on one and learn the forgotten art of bodybuilding.

NONE OF THAT
JAW JACKING,
ONLY ATTITUDE
AND FOCUS ON MUSCLE


FOCUS AND VISUALISATION WORK IS MAGICAL


IF GIVEN TIME AND PRACTICE


It’s very important to believe you are a soul with a body rather than a body with a soul.

You will create for yourself a life that is literally without LIMITATIONS.

Ian Duckett and the others who have come to visit, have helped make that dream come true.

BELOW ARE TWO OF IAN’S STARS: current world champion Jenny Garside, and one of the current Yorkshire title winners, heading into the British, Heather Smith.

Being a huge fan of the fitness and women bodybuilding competitions all-over the world. The work and effort of both these champions is appreciated.

All of us at ROBBYROBINSON.net send their support and best wishes.

JENNY AND HEATHER,
there is nothing you can’t achieve.

BE WILLING
TO BELIEVE IN YOU!

YOUR FOCUS
AND HARD WORK
WILL PAY OFF!
Read more »
Posted by Unknown at 7:30:00 AM No comments:

I RECENTLY LEG PRESSED 1000 LBS FOR 10 PERFECT REPS, WITHOUT STEROIDS. BUT INSTEAD RELIED ON THESE SOUND 3 ELEMENTS:
THEY ALLOW ME TO STILL GO INTO THE GYM AT 64 AND TEAR THE WALLS OFF THE PLACE. JUST EATING THE RIGHT FOOD IS NOT ENOUGH, IF YOU’RE SERIOUS ABOUT IMPROVING AND MAKING GAINS PARTICULARLY IF YOU’RE OVER 30.

YOU JUST HAVE TO KNOW WHEN TO USE SUPPLEMENTS AND HOW MUCH. IT DOESN'T TAKE A LOT ON TOP OF GOOD EATING. THE MAG WRITERS THAT SAY SUPPLEMENTS LACK THE POWER, ARE PAID TO WRITE WHAT THE SYSTEM WANTS.

PLEASE REVIEW MY OLD BLOGS, YOU WILL FIND TESTIMONIALS ON SUPPLEMENTS COMING STRAIGHT FROM MY OWN EXPERIENCE AND CLIENTS I'VE WORKED WITH.

HEALTHY EATING ALONG WITH SUPPLEMENTS
ARE WORTH THEIR WEIGHT IN GOLD
THEY WORK !

TO SAVE MONEY, CUTTING BACK ON EATING OUT HELPS BALANCE THE BUDGET.
PEACE, ROBBY

BODY AND ART
THE BODY IS A PIECE OF ART


THE PURSUIT OF EXCELLENCE

BY PATIENT PERFECTION OF YOUR BODY,

BY TRIUMPH OF THE HUMAN SPIRIT.

IS WHAT SPORTS AND WINNING IS ALL ABOUT.

BODY AND ART SCARF- 100% SILK HAND DYED. SOLD EXCLUSIVELY AT THE ALLEY IN BEVERLY HILLS AND HERE - DIRECTLY FROM OUR STUDIO. $140.
CONTACT INFO@ROBBYROBINSON.NET

YOU CAN TRAIN 'TIL YOU DROP

... BUT THE MOST IMPORTANT ELEMENT IS

TO BE PREPARED GOING INTO A WORKOUT.


THE ART OF BODYBUILDING

THAT STARTS WITH MAKING SURE YOUR PHYSIQUE HAS ALL THE NUTRITION THOSE MUSCLE CELLS ARE GOING TO NEED TO GROW.

YOU WANT TO TRAIN IN A NUTRIENT-INDUCED ANABOILIC STATE, WHICH MANY FAIL TO ACHIEVE.

A GREAT BREAKFAST
IS THE START

MY WORKOUTS LAST FROM 45 MINUTES TO 1 HOUR DURING WHICH MY FINAL REPS OF MY LAST SET IS INCREDIBLY TOUGH TO COMPETE IN PERFECT FORM, BUT I DO.
-- ARE A HUGE PART OF MY TRAINING REGIME. BUT I WOULD USE THESE TOOLS MORE 6-WEEKS OUT FROM THE SHOW.


THE BODY LOVES CHANGE
THAT'S THE BEAUTY OF BODYBUILDING WHEN I WON THE FIRST NIGHT OF THE CHAMPIONS IN N.Y. THE PAY CHECK WAS $7,500. THIS WAS AFTER WALKING ALL OVER N.Y FOR 1 WEEK VISITING GYMS TO HELP PROMOTE THE EVENT. I WANTED TO DO A GREAT JOB FOR MYSELF AND THE MANY FANS THAT SUPPORTED THE BLACK PRINCE AND BODYBUILDING BACK THEN. AT THE TIME I WAS BEGINNING TO SPEAK OUT TOWARDS THE EXPLOITATION WE HAD TO ENDURE AS IFBB COMPETITORS. WE PAINED DEEPLY. THERE WAS A SELECTED CLIQUE THAT WERE WELL TAKEN CARE OF. I WAS NOT ONE OF THEM IN IT. BUT I HAVE ALWAYS SEEN PROBLEMS AS OPPORTUNITIES FOR GROWTH, SO I CHALLENGED MYSELF INSTEAD OF UNFORTUNATELY FALLING APART AS MANY DID.
THE LAST TIME I ATTENDED THE IFBB MR. OLYMPIA 1 ST. PLACE WAS $125,000. DON’T FORGET THE WEIDERS SOLD THEIR PUBLICATION EMPIRE FOR $ 350-MILLION. THE ARNOLD CLASSIC, NOW BEING CALLED JUST THE CLASSIC (HUH?WONDER WHY), 1st. PLACE IS $150,000. THAT’S CHUMP CHANGE FOR BODYBUILDING'S 2 RICHEST PROMOTERS, AND THEY STILL WON’T GREASE THE PRIZE MONEY? YOU STILL HEAR THE SAME COMPLAINTS FROM THE COMPETITORS. THERE IS NOT ENOUGH MONEY FOR THE COMPETITORS TO MAKE THEM FEEL GOOD ABOUT THEMSELVES. IT’S SHAMEFUL. THE BODYBUILDERS IN THE IFBB PRO DIVISION SEEM TO STILL BE COMING OUT ON THE LOSING END AND EVERY GOLFER GETS A PAYCHECK RIGHT DOWN TO THE LAST PLACE COMPETITOR. SOMETHING IN THAT MILK AIN’T CLEAN.
PEACE, ROBBY