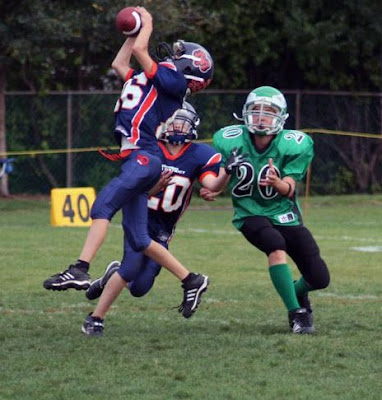 During our weight training sessions, I spoke briefly with Kyle about going after what he wants. He was a terror on the field of play. His hard work paid off . This interception helped his team win.

DIARY OF THE BLACK PRINCE

SOME OF US ARE BLESSED WITH GOOD ATHLETIC TALENT AND THEN THERE ARE SOME OF US ARE GIVEN THAT GREAT ATHLETIC - MIDAS TOUCH. AT MY FIRST ENCOUNTER WITH KYLE, I COULD SEE HE HAD A SENSE OF HIMSELF AND WAS DRIVEN TO DO BETTER AND IMPROVE ON WHAT HE HAD ALREADY ACHIEVED. HIS FATHER, GARY CASACCIO A DOCTOR OF PSYCHOLOGY, BROUGHT THE WHOLE FAMILY OUT TO LA TO TRAIN AND LEARN AT MY MASTER CLASS. KYLE RAN UP AND DOWN THE SANTA MOUNTAIN'S 198 STEPS 4 TIMES. HIS CONDITION AND STAMINA WAS VERY IMPRESSIVE. HE WAS ALSO A GO GETTER IN THE WEIGHT ROOM. MY BELIEF IS THAT THE BETTER PHYSICAL AND MENTAL SHAPE AN ATHLETE IS IN DURING THE OFF SEASON, THE BETTER PERFORMANCE HE OR SHE WILL PRODUCE ON THE FIELD OF PLAY. THAT’S WHAT LED KYLE TO BEING NAMED HIS TEAM MVP.
BEING A HUGE SPORT FAN, FOLLOWING COLLEGE AND SUPER STAR PROFESSIONAL ATHLETES FOR OVER 40 YEARS, MY IMPRESSION OF THE ATHLETES IN DIFFERENT SPORTS IS THEY ARE TOO LAID BACK IN THE OFF SEASON. THERE IS NO OFF SEASON FOR MY TASTE. WHEN YOU ARE PAID MILLIONS TO PERFORM, IT SHOULD BE AN HONOR UNTO YOURSELF TO BE IN YOUR BEST ATHLETIC SHAPE BEFORE THE SEASON START. THAT'S THE BEHAVIOR THE FANS AND OWNERS DESERVE. THAT'S WHAT I ADMIRED ABOUT KYLE. HE WAS DRIVEN, IN SHAPE, FULL OF ENERGY AND THRIVING.

KYLE ALL OF US AT BODY & ART - ROBBY ROBINSON.NET WOULD LIKE TO SAY CONGRATULATION ON BEING THE WINNER OF THE MVP AWARD. GREAT PERFORMANCE - STAY FOCUS.
PEACE, ROBBY

1. HOW DID IT FEEL TO WIN THE MVP AWARD.
Great because I helped our team win and knowing that makes me feel awesome. Everyone was cheering for me and congratulating me and that felt good. 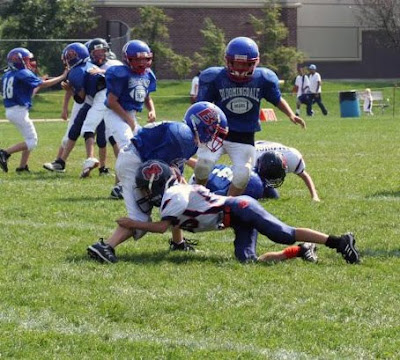 During this game, Kyle dominated the field of play on defense by making 13 tackles -giving him the MVP award hands down.

2. WHAT WAS ON IN YOUR MIND WHILE YOU WERE MAKING ALL THOSE TACKLES.
Just hit him hard make sure not to miss and take him down. Just the basics.


3. HOW DO IT FEEL TO BE A HERO ON YOUR TEAM. WERE YOUR TEAMMATES HAPPY TO SEE YOU WIN THE MVP AWARD
It felt good because I helped the team out a lot. We were playing a really good team, and it was a tough game. Yes they were happy for me. They were all saying I was going to win the MVP because I had a great game with 13 tackles. I was playing linebacker. 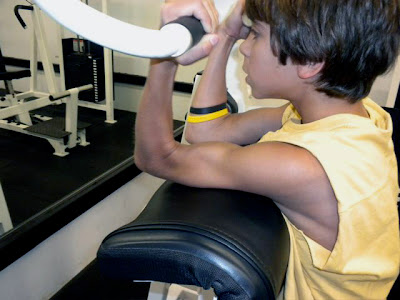 During our gym sessions, Kyle was intense and focused. That's what it takes to be a champion at any level. You can see he is working to build up his physique. Hard cold fact - you can build muscle at any age. Look at those biceps.

4. DO YOU THINK COMING OUT TO THE RR-MASTER CLASS HAD A POSITIVE EFFECT ON YOUR MINDSET TO IMPROVE YOUR OWN FIELD FOOTBALL PERFORMANCE.
Yes because you motivated me a lot and helped me push myself farther than I thought, and now I work out a little bit more. You taught me new exercises, and I wanted a six pack like yours. It was fun working out with you. 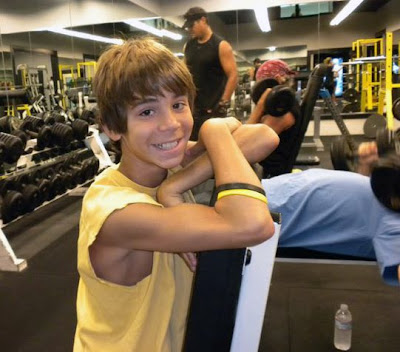 Posing for the camera while taking a break in-between exercises.

6. ARE YOU EXCITED ABOUT THIS SCHOOL YEAR - BOTH IN THE CLASSROOM AND ON THE FIELD OF PLAY.
Yes because I have a lot of new and old friends in my class, and I’m also excited about my team because we are undefeated so far. We are 4-0. 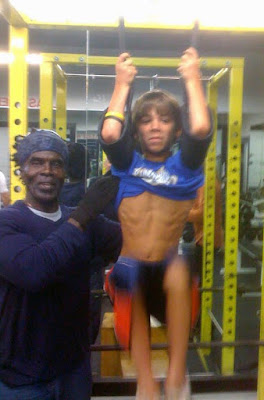 On his way to having a six pack like the Prince's.

5. ARE THE YOUNG LADIES SENDING YOU MESSAGES.
Yes all day on facebook and myspace and texting. 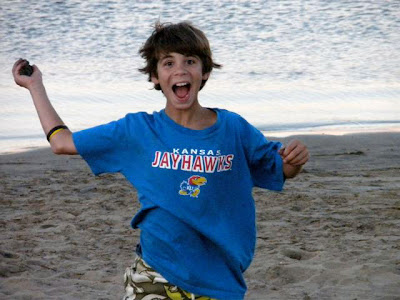 With those beach boy good looks and the desire to become a model, Kyle's home could become Los Angeles . There is always an opportunity.

6. ARE YOU EXCITED ABOUT THIS SCHOOL YEAR - BOTH IN THE CLASSROOM AND ON THE FIELD OF PLAY.
Yes because I have a lot of new and old friends in my class, and I’m also excited about my team because we are undefeated so far. We are 4-0.

7. DO YOU PLAY OTHER SPORTS
Yes baseball, basketball, wrestling, and track.

8. HAVING SUCH GREAT PARENTS GARY /JUDY, HAVE THEY BEEN A MAJOR INFLUENCE IN THE POSITIVE DIRECTION YOU ARE GOING WITH YOUR YOUNG LIFE.
Yes my dad always encourages me in everything, and so does my mom. My dad gives me exercises to help me focus which really help for football and school.

10. WHAT DO YOU LIKE TO DO IN YOUR SPARE TIME.
I like to hang out with friends or be on the computer. I also like to dance, and I hope to start martial arts soon.

FJ-KYLE WAS AND INSPIRATION.THE ONLY
LIMIT TO WHAT YOU CAN HAVE AND ACHIEVE IN YOUR LIFE IS THE SIZE OF YOUR IMAGINATION AND THE COMMITMENT TO MAKING IT A REALITY.
RR

Robby was absolutely great with both of my boys- Brett and Kyle. They really warmed up to him. Both of them have been more focused on their workouts since we have returned from Robby's Master Class and realize the importance of weight training and proper mindset when it comes to enhancing sports performance.
Gary

Kyle & Brett are some lucky kids to train with a legend!